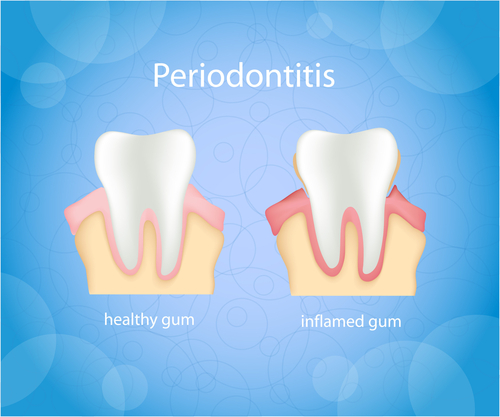 Periodontal disease sounds like something that would infect dinosaurs. However, it’s quite common in humans. Gum disease is its more common name, and it affects more than 3 million people a year. What’s your best defense against it? Proper oral care, but before we get into preventing it, let’s learn the signs and symptoms that show the need for periodontal treatment.

Signs of Periodontal Disease
You may have heard of the less intrusive form of periodontal disease called gingivitis. If you notice your gums are slightly swollen, this means they’re reacting to a buildup of bacteria in your mouth. Good news, gingivitis is completely reversible with good oral care. However, if left alone, it can lead to periodontitis, a way more invasive form of periodontal disease. Some of its side effects include bleeding gums, persistent halitosis, and loss of teeth. Other side effects are:

The symptoms above are all apart of the later stages of periodontitis. At that point, there is no reversing of the symptoms. You’ll need to contact your dentist in order to save your teeth. However, the moral of the story is, if you happen to notice early on that your gums are swelling or they’re bleeding slightly after you brush your teeth, it might be wise to concentrate a little more during your oral care routine.

Preventing Periodontal Disease
As stated above, if you’re experiencing the symptoms of late stage periodontitis, there’s no preventing further damage. However, if your gums are swollen, there are plenty of things to do in order prevent reoccurring swelling. For example, make sure you floss. It’s such an important part to your dental routine. Without flossing, you’re missing about 40% of a tooth’s total surface area. It gets that nasty plaque out of the hard to reach spots and controls bad breath. People don’t like to do it, because they say they don’t have enough time. That being said, even if you floss 2 or 3 times a week, it is shown to make a drastic improvement. Two or three is still better than zero.

Another area of improvement is brushing. Obviously, brushing is very vital to your oral health. It cleans the most amount of a tooth’s surface area. However, there are still some key spots that get overlooked while brushing. It’s important to brush along the gum line. That’s where the majority of plaque and bacteria and whatever nasty stuff collects in our mouth’s. It’s because of neglecting to brush along the gum line that gingivitis begins to form in the first place. It’s understandable that we all want bright, white smiles, however you should know that brushing at the base leads to healthier teeth.

A third and final way to prevent any form of periodontal disease is to make sure you stay on top of your dental checkups. It’s recommended that you visit the dentist twice a year. That way we can help remove tartar, a form of plaque that hardens on your teeth and becomes nearly impossible to remove at home by brushing. We understand that it’s very, very difficult to remove every little speck of plaque on your teeth. Tartar is nothing to be worried about, unless you rarely go to the dentist, but we’re all too happy to remove it for you! This helps assure your prevention of periodontal disease. We’ll also provide you personalized tips for various aspects about your own dental routine. These tips will be based on what we see going on inside your mouth when you come to visit. If you stay on top of your oral checkups, listen to our advice, floss a little more, and be more thoughtful when you brush, you’re more than likely to prevent all forms of periodontal disease.